NHSRCL Signs First Agreement for Design, Supply and Construction of Track and Track related works for Mumbai Ahmedabad High Speed Rail corridor. The contract will boost the ‘Make in India initiative’ and ‘Transfer of Technology’

The contract will boost the “Make in India initiative” as an Indian company M/s IRCON International Limited has been awarded the contract.

Speaking on the occasion, Shi Satish Agnihotri, Managing Director, NHSRCL said “We have received support from JICA in a very effective manner. I appreciate the technical support extended by JICC, JARTS and JRTC for MAHSR project.”

Minister Economic and Development, Embassy of Japan in India, Shri MIYAMOTO Shingo called Mumbai-Ahmedabad High speed Rail project as the biggest and most brightly shining example of cooperation between India and Japan. “Under this contract Indian contractors will receive transfer of Japanese Shinkansen technology which will give a big boost to Make in India initiative.” he further added.

Shri Rajendra Prasad, Director Project, NHSRCL said “The Shinkansen technology has unpanelled record of safety and track plays a very important role in the safety of train running. It is an excellent example of transfer of technology, as Japanese experts will come to India to provide training to Indian supervisors and workers involved in Track work”. 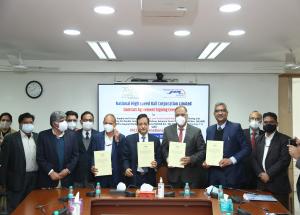 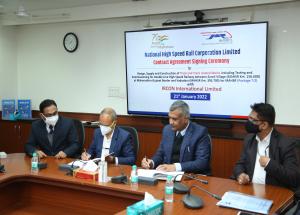