From enabling faster passenger traffic between cities to providing a safer & reliable mode of transport, and from opening a world of employment opportunities to introducing of high quality technology in the country; there are many factors that will determine the economic success of the High Speed Rail (HSR) project in the country. But the most significant among them being the local impact a project of this magnitude can create that could prove to be a major ingredient in the socio-economic appraisal of not just places, industries and people residing along the project corridor but also those across the country.
Since the introduction of first Shinkansen in Japan in 1964, high-speed trains have proven to be an undeniable technological, commercial and popular success. Many countries since then have adopted the technology and invested in what today has become a vast network of high-speed rail lines. Most notable among them being countries like U.K, France, Germany, Spain, China and most recently U.S.A, Australia and South Africa among others. While the motivation behind investing in a technology like HSR may differ for each country, the end vision remains the same: alleviate the overall quality of life by providing people with better social, economic and employment opportunities while benefitting the environment as well.
True, while in India the 508 km long Mumbai-Ahmedabad High Speed Rail project is still underway, there are countries who have in the past adopted HSR and are now in the process of expansion because its efficiency resulted in a positive long-term spillover effect in the regions served by it. Does it not make for a compelling case ready for India to replicate and improve its standing on a global platform? The opinion makers may question the suitability of developing an expensive infrastructure such as HSR at a time when the world economy is unstable. But the silver lining is that by focusing on developing a project like this right now can reap long term socio-economic benefits that in turn can elevate India’s position as a stable and sustainable economic power in the times to come.
Here’s looking at the many layers of the economic benefits India’s marquee Bullet Train project can generate and its overall impact on the people. 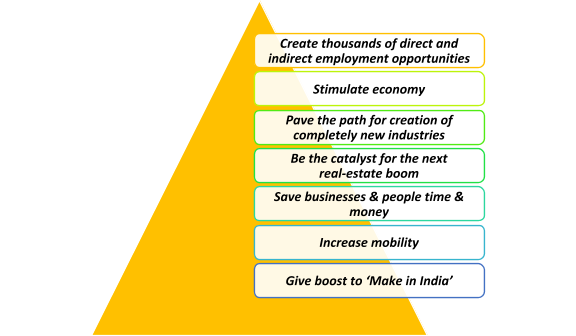 The long-term economic impact of the HSR project

It has been observed globally that countries or cities that have HSR network are more competitive and are better positioned to attract tourism, businesses, jobs, and skilled workforce. Look around and you’ll see countries like Japan, Germany, France, UK, South Korea, USA and Russia that have successfully adapted the HSR technology and have seen an upsurge in their economic status. As a developing economy, India’s chances of matching up to these bigger economies can get a boost with the completion of Bullet Train project as it will not only put India at a higher pedestal of technology & connectivity but also open doors for more foreign investment, development of new businesses and enhanced lifestyle for many. To understand how, read further.

Going forward, Japanese companies may even consider setting up manufacturing facilities for bullet trains in India. This would give an impetus to not just more employment generation but also opening up avenues for small and big manufacturers to upgrade their skills and demonstrate their manufacturing might for various other projects at a global level.

6. A real-estate boomer:-A project like Bullet train needs support of an equally world-class infrastructure. With the increase in passenger movement along the length of the project corridor, it is but given that other big small real-estate projects like schools, townships, commercial hubs, industrial buildings, independent houses, big and small retail and commercial shops, office complexes, entertainment hubs, Hospitality (highways, railway sheds etc). will also come up. With so much of economic activity happening around these towns, a boom in the real-estate market of these areas cannot be underestimated. This will give real estate developers and buyers ample time to plan ahead their purchases. No doubt, there will be plenty of development opportunities along the 508 km route of the Mumbai-Ahmedabad High Speed Rail Project. For example, Boisar has become one of the most interesting prospects as it falls in the Mumbai Metropolitan Region (MMR) but is still perceived as an inaccessible destination. This will change, thanks to the Bullet Train, as Boisar will be closer to Mumbai at a mere 40 minutes train ride and make it a more viable prospect for those looking to live and work from outside but closer to Mumbai. This means that if people invest at the right time, they will be able to afford a 3-BHK in Boisar with the money they will pay for a 2-BHK anywhere in the city. With more people coming and staying in these places, a boost in business of ancillary industries and other amenities in the mix like malls, shops, hospitals, educational institutes, hostels, hotels, restaurants etc., will also have to be developed. This again leads to a better economic prospect for the country.

7. A great social leveller:-The HSR development overall will bring in positive results for those involved in the process directly or indirectly. Right from project beneficiaries to those who will be providing construction or any other kind of support, improved standards of living await on the upside. Improvement and better opportunities for livelihood is at the center of the planning of the HSR project, therefore, one can expect a more efficient economy going forward. For those who have given up their personal land for the project, an upliftment from their previous lifestyle beckons. With more money flowing in the family, they can provide better education to their children and increase their prospect of a prosperous life ahead. Proper foundational training and skill development and acquisition of technical knowledge can help most of these families gain a better social standing as well as explore means of economic returns that they had not earlier thought of.