NHSRCL has awarded its first contract for its longest civil work (C4) package of Mumbai-Ahmedabad High Speed Rail (MAHSR) Corridor to Larsen & Toubro (L&T). The details of the contract include Design and Construction of Civil and Building Works including Testing and Commissioning on Design of 237 Km viaducts, 4 stations, depot and one mountain tunnel for the MAHSR corridor. The C-4 package is worth around INR 25,000 crore and will cover nearly 47 per cent of total alignment of the 508 km long corridor, between Vapi and Vadodara in Gujarat, including four stations namely Surat, Vapi, Billimora and Bharuch, 24 river as well as 30 road crossings. 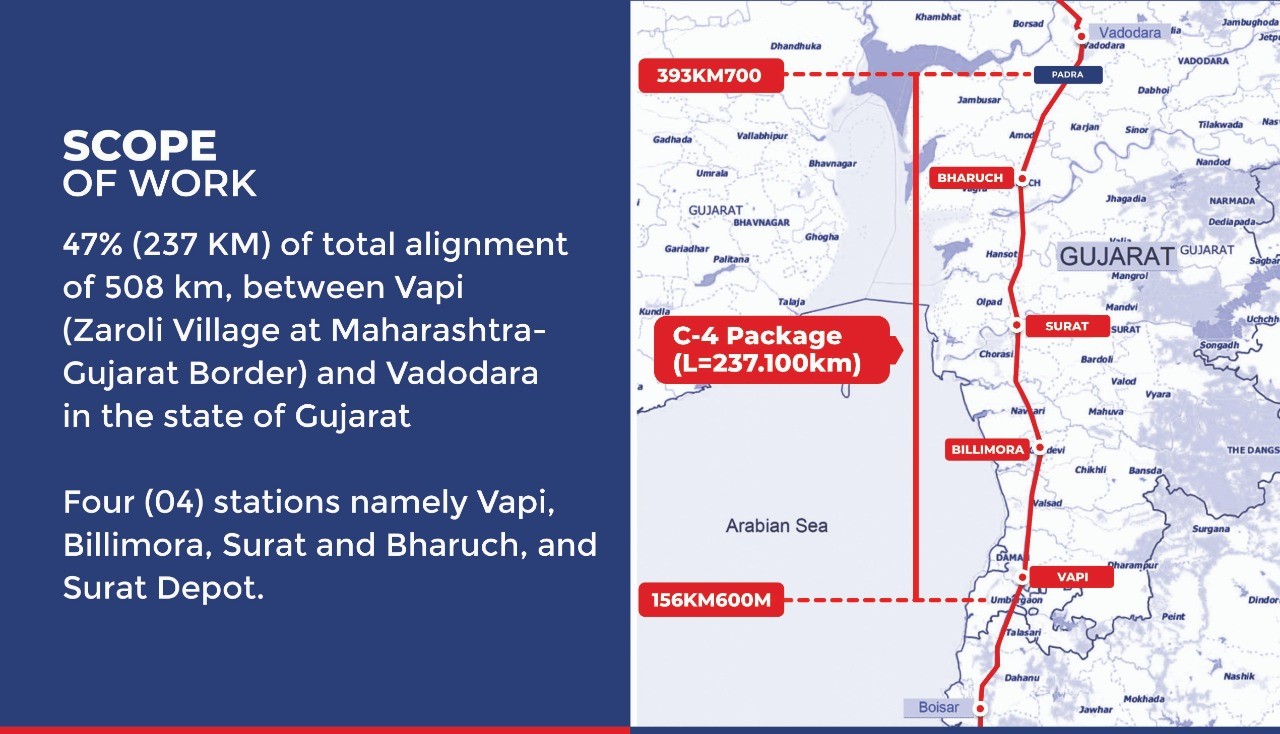 Despite being the longest civil work package for the MAHSR and one of the biggest contracts in the country, this contract was awarded in a span of just 35 days from the last date of receiving bids as opposed to the regular process which takes anywhere between 3 to 6 months. Expanding on the same, the bids for the same were received on 23rd September 2020 and the Letter of Acceptance (LOA) was issued to L&T on 28th October 2020.

The fete was not achieved easily by NHSRCL as the entire process was fraught with hurdles and hardships. To begin with, the time span of 35 days targeted by the NHSRCL team to complete this contract work in itself seemed unattainable. Add to it the challenges of the pandemic wherein working remotely from offices across Delhi, Surat and Ahmedabad etc., would have only complicated the process. Another complication that the team faced was that of the language barrier. Since, a part of the team had Japanese colleagues who were working remotely, communicating with them in a language that was understood by all the parties without error was crucial.

But charged with determination & dedication, the team members ensured the smooth flow of work and created a new benchmark for themselves by achieving something which was not done before. Despite being in the thick of pandemic, all the necessary precautions were followed to safeguard everyone’s safety. During physical meetings, all social distancing norms were practised, the number of persons attending the meeting was kept to a minimum and digital & telecommunication medium were used for regular follow-ups & coordination wherever the physical contact could be avoided.

Since there were many people and departments involved, proper coordination with each was critical for the success of the work. For example, to finalize even a minor detail pertaining to a station design, agreement with multiple departments like civil, engineering, telecom & signalling, electrical, architects etc. was needed. Therefore, the team involved a mix of experts from all departments and had more than 50 engineers from various disciplines working together on the contract package including architects, civil engineers, designers, electrical and signalling engineers, contract officers etc. To attain efficiency at every step, regular follow-up meetings by each department’s head were conducted on a daily basis. Even senior management guided the teams and supervised minute details for on-time completion of the task without compromising on the quality of work. Supervision and guidance were also extended by NHSRCL’s general consultant, JICC (Japan International Consultants Consortiums) to the team members to iron out any obstacles.

The Contract Agreement Signing Ceremony for the C4 package took place on 26th November 2020, at NHSRCL’s Delhi office. During the event, His Excellency, Shri Satoshi Suzuki, Ambassador of Japan to India said, “The High Speed Rail is our flagship project, which symbolizes a solid Japan-India friendship. Through joint efforts, Japan’s technical expertise and know-how will be transferred to India. Not only with the amazing speed of “bullet trains”, but also the High Speed Rail Project will provide a fresh outlook to the Indian railway system and its culture, with top-level safety, comfort, and convenience. The Project also can reshape the way Indian cities will look like in the future, as transit-oriented city development takes roots on Indian soil. 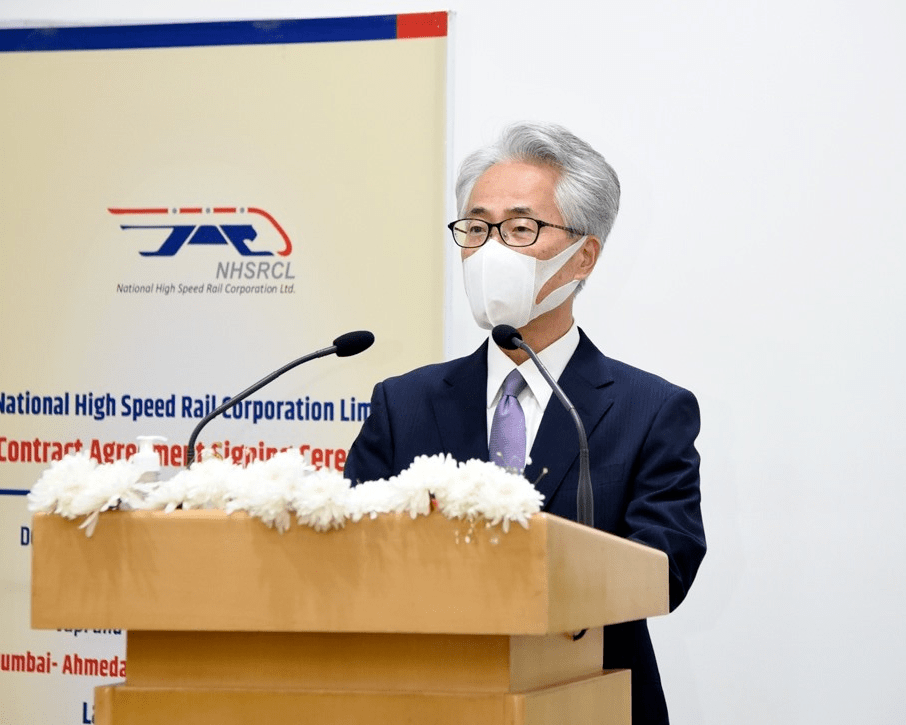 The work commencement of C-4 Package will surely boost India’s economy and lead to job creation in various fields related to construction, engineering, planning & maintenance etc. All the civil Packages are open to Indian companies for contracts and are expected to raise the quality standards for Indian companies and enhance the skills of Indian technicians to match the HSR requirement. This will not only reduce the cost but also uplift the ‘Make in India’ side of things in the country. 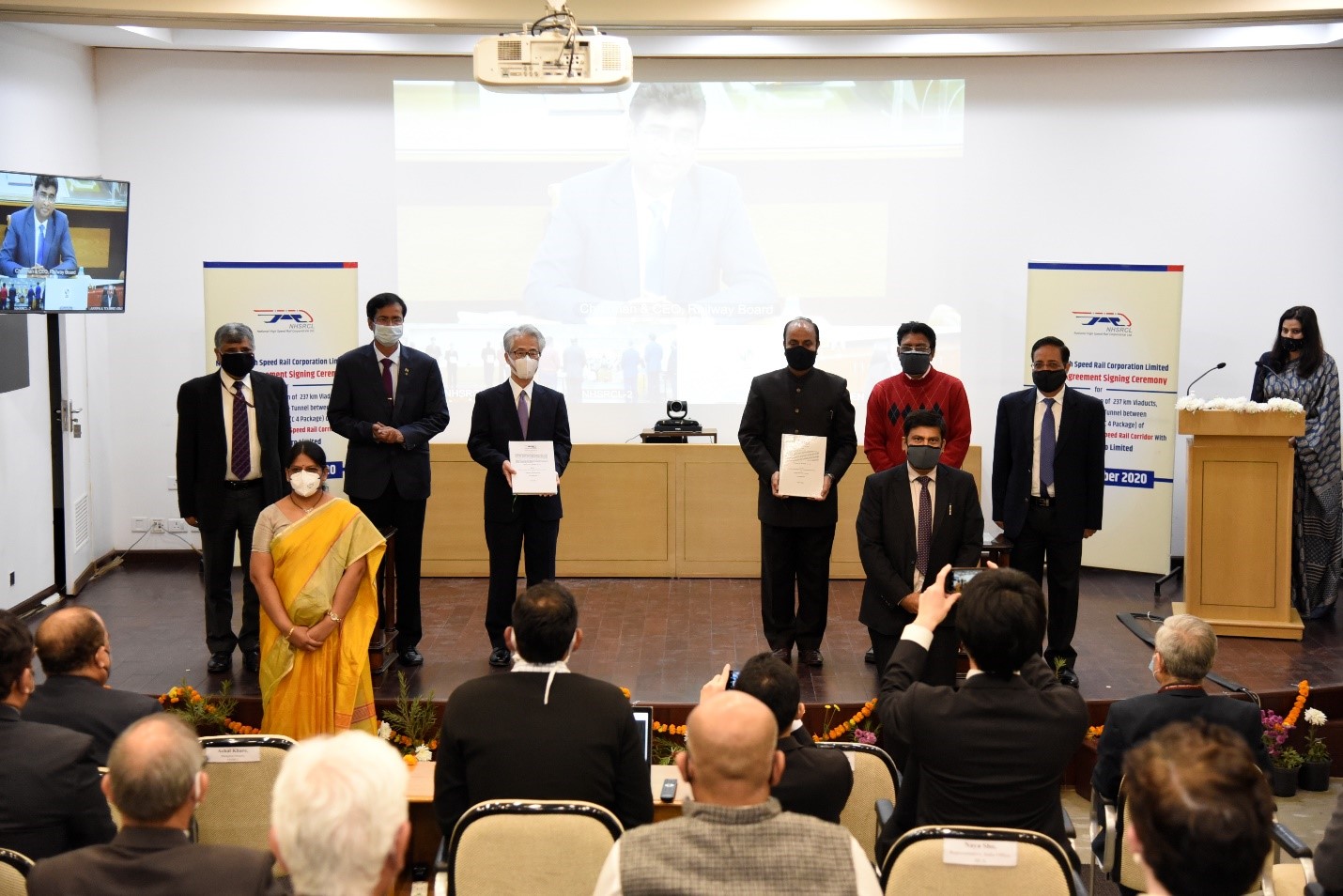 Before the contract signing ceremony, more than 30,000 pages of bid documents were drafted by the team from scratch that too without any reference. Additionally, 20,000 pages of contract documents were drafted in two sets, wherein each of these pages was signed individually by both the parties. Remember all this was being done by the NHSRCL team members at a time when people all over the world were afraid of touching even a single piece of paper and under the pressure of an extremely tight timeline. Therefore, most of these 35 days were spent in office meeting rooms finalising and discussing even minutest details as submitted in technical bids. In short, the 35 days of hard work put in by the NHSRCL team for completion of the C4 package work is an example of efficient coordination, technical competence and management’s trust in those who were involved in this ground-breaking and mammoth task.

The MD, Shri Achal Khare, said while appreciating the hard work and the dedication of the team to complete this mammoth task in the tight timeline, “It is not how we see ourselves as an organisation, it is how others see us and we have proved that we can do it and we have to maintain that.”

The former Chairman and CEO of Railway Board, Shri V.K.Yadav, shared his thoughts on the Bullet Train project, “Indian government has identified 7 more sections where the feasibility study is going on and National High Speed Rail Corporation is carrying that feasibility study. So, I can just say that this is the beginning of Bullet Train project in India and I sincerely thanks Japanese govt, with their support India has started the bullet train project and this is only the beginning and once the Mumbai-Ahmedabad project is completed we will be taking up many more projects for High Speed Rail.”

The construction activities have started for the C-4 package and NHSRCL team is ready to take up the challenge and complete the assigned task within the stipulated time.