The alignment of Mumbai-Ahmedabad High Speed Railway corridor is, in general, kept straight to meet the requirement of high speed because of which most of the alignment is passing through green fields. However, the alignment is diverted at Vadodara, Ahmedabad and Sabarmati to bring the HSR alignment near to IR stations so that the passengers may get the comfort of easy transfer between the two modes of transport. Since the area near Railway stations are very congested, this purpose of integration has brought lot of difficulties along in terms of land acquisition, utility shifting, Road diversions, multi-modal traffic planning and difficult working conditions for construction near running railway tracks. Although, the changed alignment is passing in front of main station building, all efforts are made to enhance the front appearance of the station.

The initial survey for HSR alignment was done in early 2017. In the Vadodara station area, the HSR alignment is designed to cross the yard from east to west near the platform area where almost 13 lines are to be crossed. The Bridge spans proposed to cross the Railway tracks from West to East were 100 m + 220 +120 m. In fact, in the Japanese Shinkansen high speed network also, such a big bridge is never constructed. As per the estimate, total 25000 MT of steel was expected to be consumed in this bridge construction.

The challenges with this scheme were as under -:

The proposed launching scheme poses the biggest challenge of the design of the pin on which the 220 m span girder is planned to be rotated. No such scheme was planned and executed anywhere.
The scheme for launching of main girder requires launching of the temporary girder on which the other end of main girder would move. The launching of temporary girder over running lines and then, its maintenance for the launching work of main girder would have been very challenging.
Safety of running trains during execution of works would have been a big challenge.
The time estimated for steel girder fabrication and launching was 66.6 months, which is not fitting into the overall timeline of the project.

b) Permission from Airport Authority of India

The site is coming in the red CCZM zone i.e. on the flight path of the aircrafts coming in and out to the Vadodara airport which requires clearance of air space from Airport authority of India. As per the scheme, the launching arm of the crane was supposed to be raised upto 131 m from MSL (Rail level at 31 m) while the height permitted as per the AAI norms for this location was only 95.910 m. It means that during the launching operations of the girders, all the flights movements have to be cancelled. Finally, the scheme was not approved by Airport Authority of India.

c) Major Repercussions on Platform No. 6 of Vadodara Railway Station of IR

The new HSR station is planned above the existing platform No. 6 of IR. The foundations are coming very close to the running railway lines, which would make the construction work a big challenge. The whole platform and the circulating area will be covered by the grid of columns of 12 m x 12 m. The work needs to be carried out in phases. Also, since the construction work would continue for 3 to 4 years, the passenger safety will require a major attention. 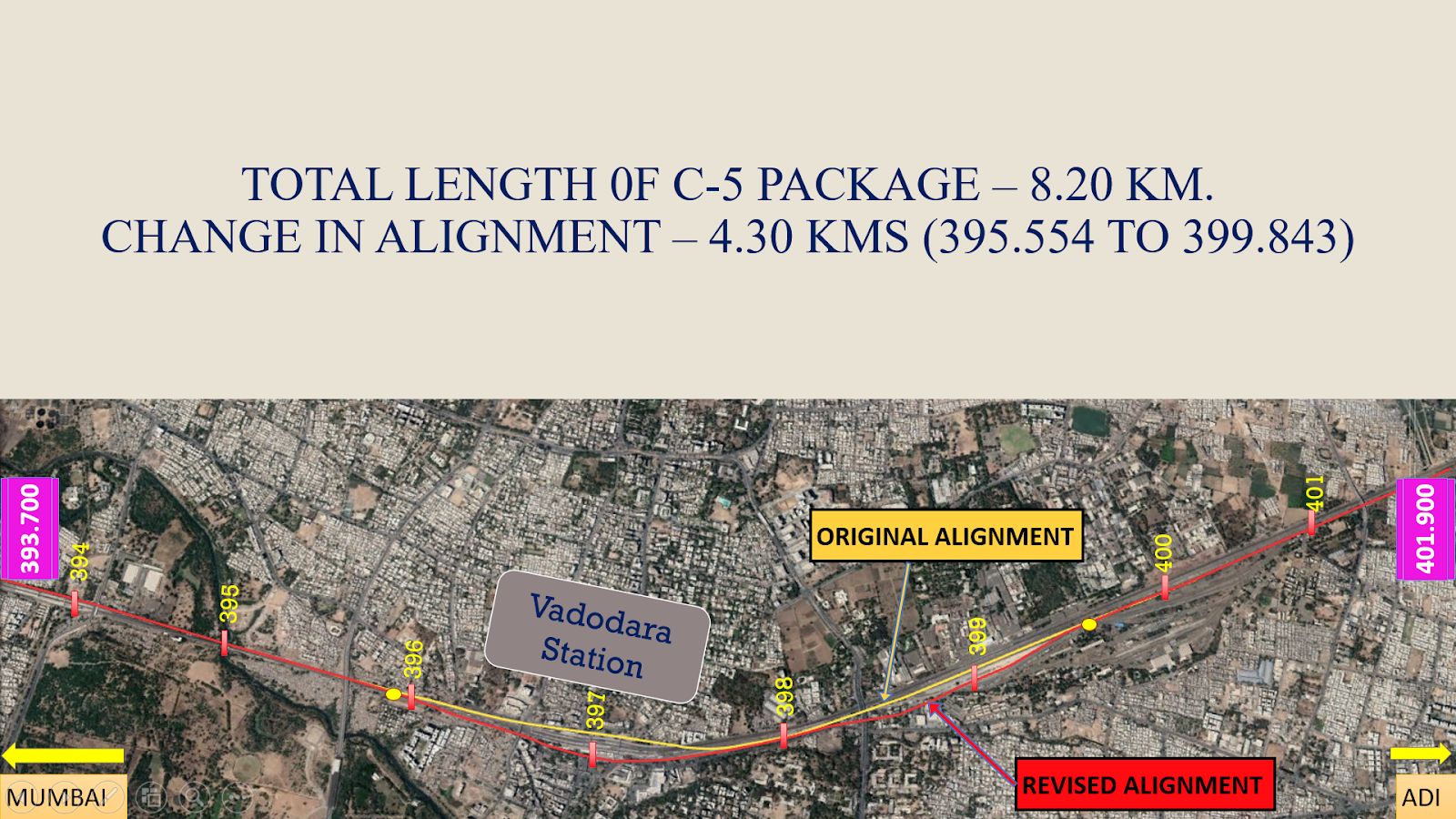 The problems were discussed during regular meetings and it was decided to explore the possibilities of taking the alignment straight ahead in the eastern side only and cross the tracks ahead of yard. The scheme was found feasible with certain prerequisites as under -:

Hence, as per the new alignment, the HSR alignment crossed the IR tracks with the ordinary span of 40 m on portal piers.

a) Time benefits -: As per present estimate, the work as per present alignment will be completed in Appx 48 months as against earlier estimate of 66.6 months.
b) Considerable reduction in design phase –: In the earlier scheme, many of the special bridges involved which necessitates the requirement of special design of these structures. Since now, most of the spans are standard span, the requirement of special design is very less in comparison.
c) Better Station location -: The present location offers better Multi-modal integration planning on following grounds -:

d) Proper location of Distribution Sub Station (DSS) and Signalling Equipment Room (SER) –: Earlier, due to paucity of the space, the DSS and SER was planned in two parts. In the present case, it is possible to plan the whole DSS and SER very near to the HSR station.

e) Financial Benefits -: As per current assessment, there is a saving of about 2000  crores.

f) Major Displacement of Commercials and Housing Unit is avoided because of the change in alignment.

g) In earlier scheme, the roads near station were to be blocked and to be covered under HSR elevated track alignment which is now avoided.